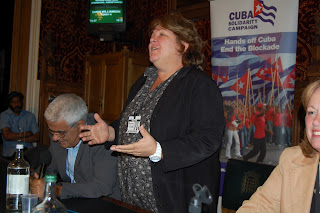 Over 150 people – alongside a number of parliamentarians – crammed into a packed meeting at the House of Commons to hear an inspirational talk by Aleida Guevara, daughter of Che Guevara. She spoke about her father, the ongoing blockade of Cuba and the Miami Five’s continuing struggle for justice.

On the blockade, Aleida said that Cuba understands the America’s “right not to trade with us, but what is unacceptable is that the US tries to stop other countries from trading with us”. Denying Cuba the right to trade with its closest neighbour significantly increases the cost of imports and means that Cuba often has to travel around the world to do business with third countries.

“We have to go all the way to New Zealand to get powered milk for our children, and you can imagine how expensive this is. To go all that way, we have to charter a ship – but blockade legislation means that any ship that goes to Cuba is prevented from docking in any American port for 6 months. So ship owners will often charge us three times as much.”

“Since the blockade has not been enough to destroy the unity of the Cuban people and the revolutionary process, the US administration has tried a mixture of military and biological warfare against Cuba,” said Aleida. Furthermore, Cuban-Americans in Florida have been used to undermine Cuba’s sovereign government.

“How can we put an end to these activities?” asks Aleida. “The only option we have is through information. If you have adequate information, you can work to prevent these terrorist attacks.”

It was precisely for these reasons that Cuba sent the Miami Five to collect information on terrorist groups operating out of Florida. Aleida condemned their trial and their ongoing imprisonment.

“As a law, no trial should take place where there is bias and impartiality. This trial took place in Miami, in the same place where these terrorists are. What type of justice can you expect? We now have information that the media in Miami was financed before and during the trial by the government to spread information against the Miami Five.”

Despite struggling against economic blockade, biological warfare and terrorism, Cuba has built a society founded on the principles of free education, healthcare and unparalleled internationalism. It is able to send tens of thousands of doctors abroad and has led literacy campaigns across the under-developed world.

“Cuba is not perfect, we are aware of that,” said Aleida. “No society created by humans can ever be perfect. We make mistakes, but we defend the right we have to rectify those errors. No Cuban will ever go anywhere else to tell people what to do. We have learnt to respect other human beings.”

Aleida questioned why Cuba – a small country blockaded for 50 years – has contributed so much to under-developed countries whilst wealthy nations have done relatively little. “Cuba has proven that when a people rules over its own destiny, there’s no power on earth that can stop it. We have undoubtedly shown that there is another way in which you can live. We cannot give you special recipes – but if we can do it – why can’t you?”

A number of politicians spoke alongside Aleida as they welcomed her to parliament. Michael Connarty MP reflected on his long-standing affinity with progressive movements in Latin America and Che Guevara in particular. “When I was young, I grew my hair and had a beard to feel like I look like Che Guevara. Looking back, I looked more like Rasputin,” he quipped.

He praised ordinary Cubans and their commitment to social justice in the face of Western intervention. “The commitment and determination of the people – despite being crushed by blockade led by capitalist nations – is incredible. They are still determined to see the revolution through to create a better world”.

A number of years ago, Michael Connarty became the first MP to sponsor an Early Day Motion (EDM) in support of the Miami Five and last week tabled EDM 497 which calls for visitation rights to be granted to Adriana Perez and Olga Salanueva to see their husbands, Gerardo Hernandez and Rene Gonzalez.

“What was the crime of the Miami Five? To protect their country. We give people medals for that,” Michael lamented.

“They weren’t being violent, fomenting revolution, or planting bombs – they were trying to collect information on terrorists.”

Michael declared that the continuing denial of visitation rights represents a breach of human rights – rights which America “claim they are founded on”. He urged constituents to write to their MPs asking them to sign EDM 497 but also said, “write to the Prime Minister, write to William Hague, write to Obama, write to the European Commission on Human Rights, write to anyone supposedly interested in human rights. Never give up. Keep fighting, and I will fight with you.”

Cathy Jamieson MP spoke about her experience of being involved in a CSC local group before entering parliament and – once elected – how she felt it was her “duty to do what I could to highlight the issues around Cuba, particularly the blockade which has lasted 50 years”.

Cathy spoke about how she has helped to re-establish the All Party Parliamentary Group on Cuba and the recent IPU parliamentary delegation to the Caribbean island which “signal that parliamentarians from lots of parties are interested in Cuba and the issues facing the island”. The delegations was reminded of Robert Owen as they learnt about the co-operative movement in Cuba and the process of common ownership.

She emphasised that there is a “committed group of politicians in the Commons and the Lords who will continue to raise concerns around the blockade and the Miami Five” and echoed Michael Connarty by urging all those in attendance to write to their MPs to sign EDM 497.

Baroness Angela Smith, Chair of the APPG on Cuba and Vice-Chair of CSC, thanked Aleida for her attendance and called on the solidarity movement in the UK to increase pressure in support of the Miami Five and in opposition to the blockade and, in particular, the EU Common Position. Angela reflected on the recent parliamentary delegation to Cuba where the UK solidarity campaign is widely recognised as “the best in the world”.

Aleida thanked CSC members and affiliates for their continuing support. “Some have said, I don’t know if it’s true, that Che Guevara once said that solidarity is the best expression of the tenderness of the people. Men and women’s tenderness makes solidarity possible. When a person admires another person, it’s because that person has the same values. That’s why it’s great to see your solidarity and as a Cuban woman, doctor and mother, I have to say thank you very much. Thank you for your resistance, let’s all struggle together for a better world. Hasta Victoria Siempre!”

Who are the Cuba Solidarity Campaign?

The Cuba Solidarity Campaign (CSC) campaigns in the UK against the US blockade of Cuba and for the Cuban people's right to self-determination and sovereignty.